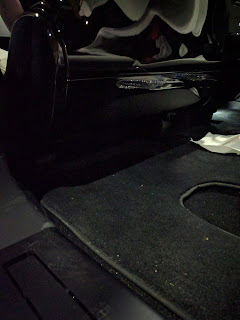 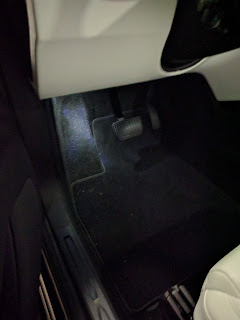 Posted by Geekinthecockpit at 6:15 AM No comments:

In that time I've burned millions of electrons....but just 3 gallons of gas. Tonight I burned maybe 1/10th of a gallon on the way home....and felt guilty about it.

We had a 80 mile round trip. The cost to drive 80 miles is about $1.80 on electricity. The range extender holds 1.9 gallons. That fuel will last about 65 miles. The fuel was pumped about a month ago at $3.20 a gallon. Those are high priced miles as it's more than 4X the cost to go the same distance on gas versus electricity!

I had hoped to make it home on electricity alone, but at 6% battery charge the gas generator kicks on. It was a double edged sword. Burning gas meant we could get home, but the noise (only noticeable as it's normally not present) was different than the normal quiet serene cabin.

More than 3000 miles later I have no regrets. I love driving on electricity versus gas. The quiet operation...the smooth power delivery...the instant torque...is addicting. The cheap operation helps a lot as well. I like driving almost too much as over the last 3 years I've averaged 6500 miles a year. I've driven 3000 in 3 months! I'm sure it will even out.

For those whom have never driven an electric car I will quote Ferris Bueller, "It is so choice. If you have the means, I highly recommend picking one up."

We each have a few thousand miles on our electric cars,  BMW I3 for me and a Nissan Leaf for Kelli.

We are still happy. Neither has run out of power or even come close to it. I've used 2.5 gallons of gas in almost 3,000 miles.

Never going back to a traditional car. Electric is just so smooth, quiet and efficient.
Posted by Geekinthecockpit at 12:59 PM No comments:

Posted by Geekinthecockpit at 7:45 AM 2 comments:

I've had my BMW I3 for a little more than a month. Being a new car I drove way more than I normally do. I've averaged 600 miles a month over the last 7 years.

My BMW I3 is the Range Extender model meaning it has a gas generator on board for extra range. The gas engine NEVER DRIVES THE WHEELS which is the opposite of the Chevy Volt. The generator is simply there as a backup. Once the generator kicks on I can drive about 70 miles additional miles. Total "range"  is about 150 miles total.

We also have a Nissan Leaf that Kelli drives. Her car is ONLY electric with no backup. She's had her car two months and has only had one issue. While on a very long outing she sensed she needed to charge before continuing home. We visited two quick chargers (that can fill the car to 80% in 30 minutes) but both were occupied. We used a slow charger for a bit and she made it home fine. Turns out she would have made it home without ever charging.

Electric cars aren't for everyone. I hope to post more frequently about our experiences. One thing we both like is the total vibration free driving. It's eerily quiet and relaxing to drive electric.

The Prius is a fine car...but it's not me. It is an interesting car for all the wrong reasons. The only thing I liked about the Prius was it was cheap to operate.

Over the last few months I've had a good streak money wise. It's not a lot of money, but a good chunk of change.

With the money I'm able to accelerate the purchase of the next car.

I go to 3 to 4 auto shows a year. I also read 5-6 auto magazines a month. I know a lot about every vehicle for sale in the United States. After much internal debate I've decided to go electric.

I've ordered a BMW I3 fully electric car. It will go 80-110 miles on a charge. It will hit 60 miles per hour in 7 seconds and seats 4 people in comfort surrounded by technology.

Kelli and I both test drove an I3 a month ago and loved it.

Thanks to a high school friend I was able to order an I3 for way under sticker price.

I ordered a Tera trim level with every option except the 20 inch wheels. After more than $10,000 in government incentives, the trade in of the 2004 Prius and the money off sticker I will finance $33,000. The most expensive car ever.

When we built our new house we had a 220V line run in the garage in anticipation of an electric car. We assumed Kelli would be the first....funny how things play out.

Below is an I3 identical to the one I have on order. It's supposed to go into production next week and arrive late July or early August.

Posted by Geekinthecockpit at 1:16 PM No comments:

Seriously Kei it's true. This is on the Internet so it must be true.
Posted by Geekinthecockpit at 11:21 AM No comments: